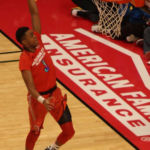 Why Is D'Angelo Russell Influential?

According to Wikipedia, D'Angelo Danté Russell , also known as DLo , is an American professional basketball player for the Minnesota Timberwolves of the National Basketball Association . He was selected as a McDonald's All-American in 2014 and played college basketball for the Ohio State Buckeyes. He was the second overall pick in the 2015 NBA draft by the Los Angeles Lakers. Playing point guard, he was named to the NBA All-Rookie Second Team with the Lakers in 2016. He was traded to the Brooklyn Nets in 2017, and received his first All-Star selection in 2019. In the 2019 off-season he joined the Golden State Warriors via a sign-and-trade deal, and was then traded to the Timberwolves at the 2020 trade deadline.

Other Resources About D'Angelo Russell

What Schools Are Affiliated With D'Angelo Russell?

D'Angelo Russell is affiliated with the following schools: