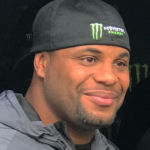 Why Is Daniel Cormier Influential?

According to Wikipedia, Daniel Ryan Cormier is an American former professional mixed martial artist, amateur wrestler, and commentator for the UFC. He is a former Ultimate Fighting Championship Light Heavyweight and Heavyweight Champion. Cormier is the second fighter in UFC history to hold titles in two weight classes simultaneously and is the first to defend titles in two divisions. As an international wrestler, Cormier was a six-time US World or Olympic Team Member, a World bronze medalist, a World Cup runner-up, a Pan American Games gold medalist and a two-time Pan American champion. In folkstyle wrestling, he was an NCAA Division I National and two time Big 12 Conference runner-up for the Oklahoma State Cowboys and a two-time NJCAA champion.

Other Resources About Daniel Cormier

What Schools Are Affiliated With Daniel Cormier?

Daniel Cormier is affiliated with the following schools: