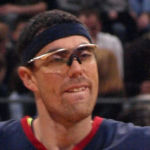 Why Is Daniel Santiago Influential?

According to Wikipedia, Daniel Gregg Santiago is a Puerto Rican former professional basketball player. A center, he had a collegiate career in the NCAA and NAIA. His professional career saw him play in the NBA, the Baloncesto Superior Nacional of Puerto Rico, and overseas. Santiago has played for the Puerto Rican national team since 1998 until 2014, including been part of the 2004 team that defeated the United States at the 2004 Olympic Games in Greece.

Other Resources About Daniel Santiago

What Schools Are Affiliated With Daniel Santiago?

Daniel Santiago is affiliated with the following schools: