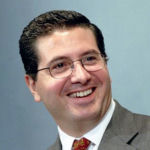 Owner of the Washington Comanders

Why Is Daniel Snyder Influential?

According to Wikipedia, Daniel Marc Snyder is an American businessman and owner of the Washington Commanders, an American football team belonging to the National Football League . He bought the team, then known as the Washington Redskins, from Jack Kent Cooke's estate in 1999. Snyder's ownership of the team has been controversial, with accusations of a toxic workplace culture leading to a Congressional investigation, as well as the lack of success sustained by the team.

Other Resources About Daniel Snyder

What Schools Are Affiliated With Daniel Snyder?

Daniel Snyder is affiliated with the following schools: