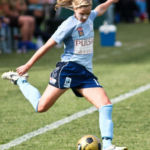 Why Is Danielle Small Influential?

According to Wikipedia, Danielle Margaret Small is a retired Australian soccer player, who played for Sydney FC in the Australian W-League. Small has represented Australia at the 2003 FIFA Women's World Cup, the 2004 Olympics, and the 2007 FIFA Women's World Cup. She played in the USA Collegiate NCAA Division One Soccer Competition finishing her career at San Diego State University in 2001, studying Exercise Physiology. Previous colleges include University of Mobile, Alabama, and Phillips University in Enid, Oklahoma. Small played two seasons in the U.S WPSL, representing the Jackson Calypso, Mississippi in 1998, and the Adirondack Lynx, New York in 2006. She completed a degree in Biomedical Science, Forensic Biology at The University of Technology, Sydney in 2010.

Other Resources About Danielle Small

What Schools Are Affiliated With Danielle Small?

Danielle Small is affiliated with the following schools: