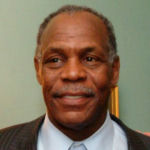 Why Is Danny Glover Influential?

According to Wikipedia, Danny Lebern Glover is an American actor, film director, and political activist. He is widely known for his lead role as Roger Murtaugh in the Lethal Weapon film series. He also had leading roles in his films included The Color Purple, To Sleep with Anger, Predator 2, Angels in the Outfield, and Operation Dumbo Drop. Glover has prominent supporting roles in Silverado, Witness, A Rage in Harlem, Dreamgirls, Shooter, Death at a Funeral, Beyond the Lights, Sorry to Bother You, The Last Black Man in San Francisco, The Dead Don't Die, Lonesome Dove and Jumanji: The Next Level. He is also an active supporter of various political causes.

Other Resources About Danny Glover

What Schools Are Affiliated With Danny Glover?

Danny Glover is affiliated with the following schools: