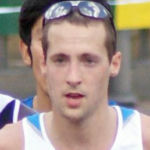 Why Is Dathan Ritzenhein Influential?

According to Wikipedia, Dathan James Ritzenhein is a retired American long-distance runner, and current head coach of On Athletics Club. He held the American record in the 5,000 metres from 2009-2010, when it was broken by Bernard Lagat. He is a three-time national cross country champion with wins at the USA Cross Country Championships in 2005, 2008 and 2010. Formerly a Nike athlete for the majority of his professional career, Dathan joined the Hansons-Brooks Distance Project team in 2017. In early May 2020, he announced his retirement from competition. He signed with the Swiss shoe brand On shortly thereafter in June 2020 and currently acts as the coach for the OAC in Boulder, Colorado.

Other Resources About Dathan Ritzenhein

What Schools Are Affiliated With Dathan Ritzenhein?

Dathan Ritzenhein is affiliated with the following schools: