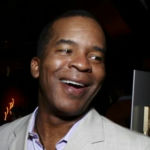 Why Is David Alan Grier Influential?

According to Wikipedia, David Alan Grier is an American actor, singer, and comedian. He is best known for his work as Bernard on Damon , as David Bellows on Life with Bonnie , as Joe Carmichael on The Carmichael Show , as Hal on A Series of Unfortunate Events , and for his movie roles such as Roger in Streamers , Carl Bentley in Jumanji , and Jim Fields in Bewitched .

Other Resources About David Alan Grier

What Schools Are Affiliated With David Alan Grier?

David Alan Grier is affiliated with the following schools: