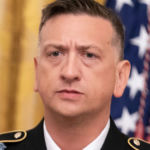 American Iraq War veteran who was awarded the Medal of Honor.

Why Is David Bellavia Influential?

According to Wikipedia, David Gregory Bellavia is a former United States Army soldier who was awarded the Medal of Honor for his actions during the Second Battle of Fallujah. Bellavia has also received the Bronze Star Medal, two Army Commendation Medals, two Army Achievement Medals, and the New York State Conspicuous Service Cross. In 2005, Bellavia was inducted into the New York Veterans' Hall of Fame. He has subsequently been involved with politics in Western New York State. Upon being awarded the Medal of Honor on June 25, 2019, Bellavia became the first, and currently only living recipient of the Medal of Honor for service during the Iraq War.

Other Resources About David Bellavia

What Schools Are Affiliated With David Bellavia?

David Bellavia is affiliated with the following schools: