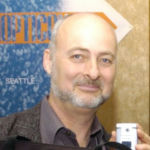 Why Is David Brin Influential?

According to Wikipedia, Glen David Brin is an American scientist and author of science fiction. He has won the Hugo, Locus, Campbell and Nebula Awards. His novel The Postman was adapted into a 1997 feature film starring Kevin Costner.

Other Resources About David Brin

What Schools Are Affiliated With David Brin?

David Brin is affiliated with the following schools:

What Are David Brin's Academic Contributions?

David Brin has made the following academic contributions: