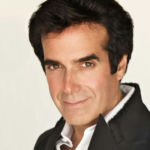 Why Is David Copperfield Influential?

According to Wikipedia, David Seth Kotkin , known professionally as David Copperfield, is an American magician, described by Forbes as the most commercially successful magician in history. Copperfield's television specials have been nominated for 38 Emmy Awards, winning 21. Best known for his combination of storytelling and illusion, his career of over 40 years has earned him 11 Guinness World Records, a star on the Hollywood Walk of Fame, and a knighthood by the French government. He has been named a Living Legend by the US Library of Congress.

Other Resources About David Copperfield

What Schools Are Affiliated With David Copperfield ?

David Copperfield is affiliated with the following schools: