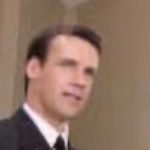 Why Is David James Elliott Influential?

According to Wikipedia, David James Elliott is a Canadian actor who was the star of the series JAG, playing lead character Harmon Rabb Jr. from 1995 to 2005.Early life Elliott was born David William Smith on September 21, 1960, in Milton, Ontario, Canada, the son of Patricia Smith , an office manager, and Arnold Smith, a heating and plumbing wholesale contractor. He was born the second of three boys. During his teenaged years, he was part of a band, quitting Milton District High School in his final year to pursue his dream of becoming a rock star. However, at age 19, he realized this would not happen and returned to finish high school.

Other Resources About David James Elliott

What Schools Are Affiliated With David James Elliott?

David James Elliott is affiliated with the following schools: