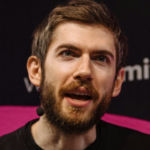 Why Is David Karp Influential?

According to Wikipedia, David Karp is an American webmaster, entrepreneur, and blogger, best known as the founder and former CEO of the short-form blogging platform Tumblr. Karp began his career, without having received a high school diploma, as an intern under Fred Seibert at the animation company Frederator Studios, where he built the studio's first blogging platform and conceived, wrote, and edited their first internet video network, Channel Frederator. Karp went on to work for online parenting forum UrbanBaby until it was sold to CNET in 2006. Karp then started his own software consulting company, Davidville, where he worked with computer engineer Marco Arment on projects for clients. During a gap between contracts in 2006, the two began work on a microblogging website, which was launched as Tumblr in February 2007. As of November 1, 2017, Tumblr hosts over 375.4 million blogs. In August 2009, Karp was named Best Young Tech Entrepreneur 2009 by BusinessWeek and in 2010, he was named to the MIT Technology Review TR35 as one of the top 35 innovators in the world under the age of 35.

Other Resources About David Karp