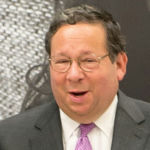 American businessman and ambassador to Canada

Why Is David L. Cohen Influential?

According to Wikipedia, David L. Cohen is an American businessman, attorney and lobbyist who is the United States ambassador to Canada. He previously served as the senior advisor to the CEO of Comcast Corporation. Until January 1, 2020, he was senior executive vice president and chief lobbyist for Comcast. He also served as chairman of the board of trustees for the University of Pennsylvania and was chief of staff to former Philadelphia Mayor Ed Rendell.

Other Resources About David L. Cohen

What Schools Are Affiliated With David L. Cohen?

David L. Cohen is affiliated with the following schools: