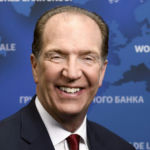 Why Is David Malpass Influential?

According to Wikipedia, David Robert Malpass is an American economic analyst and former government official serving as President of the World Bank Group since 2019. Malpass previously served as Under Secretary of the Treasury for International Affairs under Donald Trump, Deputy Assistant Treasury Secretary under Ronald Reagan, Deputy Assistant Secretary of State under George H. W. Bush. He served as Chief Economist at Bear Stearns for the six years preceding its collapse.

Other Resources About David Malpass

What Schools Are Affiliated With David Malpass?

David Malpass is affiliated with the following schools: