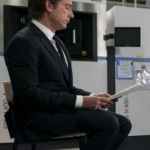 Why Is David Muir Influential?

According to Wikipedia, David Jason Muir is an American journalist and the anchor of ABC World News Tonight and co-anchor of the ABC News magazine 20/20, part of the news department of the ABC broadcast-television network, based in New York City. Muir previously served as the weekend anchor and primary substitute anchor on ABC's World News Tonight with Diane Sawyer succeeding her on September 1, 2014. At ABC News, Muir has won multiple Emmy and Edward R. Murrow awards for his national and international journalism.

Other Resources About David Muir

What Schools Are Affiliated With David Muir?

David Muir is affiliated with the following schools: