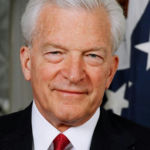 Why Is David Mulford Influential?

According to Wikipedia, David Campbell Mulford was the United States Ambassador to India from January 23, 2004 to February 2009, and served as Vice-Chairman International of Credit Suisse from 2009 to 2016. He is currently a distinguished visiting fellow at the Hoover Institution, focusing on research, writing, and activities related to global economic integration, including the legal and political environments of trade agreements and their management. He also concentrates his efforts on economic growth in the Indian subcontinent and the trend of receding globalization in developed economies.

Other Resources About David Mulford

What Schools Are Affiliated With David Mulford?

David Mulford is affiliated with the following schools: