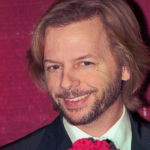 Why Is David Spade Influential?

According to Wikipedia, David Wayne Spade is an American actor, stand-up comedian, television host, and writer. He was a cast member on Saturday Night Live in the 1990s, and he later began an acting career in both film and television. He also starred or co-starred in the films Tommy Boy , Black Sheep , Joe Dirt , Dickie Roberts: Former Child Star , The Benchwarmers , The Ridiculous 6 , The Do-Over , and The Wrong Missy .

Other Resources About David Spade

What Schools Are Affiliated With David Spade?

David Spade is affiliated with the following schools: