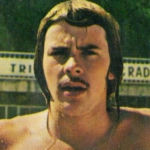 Why Is David Wilkie Influential?

According to Wikipedia, David Andrew Wilkie is a Scottish former competitive swimmer who was Olympic and Commonwealth Games champion in the 1970s. He is the only person to have held British, American, Commonwealth, European, world and Olympic swimming titles at the same time and was the first British swimmer to win an Olympic gold medal since Anita Lonsbrough in 1960.

Other Resources About David Wilkie

What Schools Are Affiliated With David Wilkie ?

David Wilkie is affiliated with the following schools: