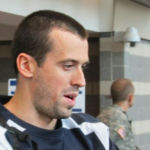 Why Is Davis Tarwater Influential?

According to Wikipedia, Davis Edward Tarwater is an American swimmer and Olympic gold medalist. He grew up in Knoxville, Tennessee and began competitive swimming at age seven. During high school, he set three state swimming records and led Webb School of Knoxville to the state title. In 2002, he was named High School Swimmer of the Year. Tarwater attended the University of Michigan, earning a bachelor's degree in political science, and St. Antony's College, Oxford earning a master's degree in Latin American Studies.

Other Resources About Davis Tarwater

What Schools Are Affiliated With Davis Tarwater?

Davis Tarwater is affiliated with the following schools: