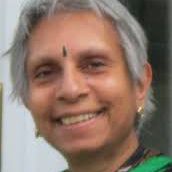 Debjani Chatterjee MBE is an Indian-born British poet and writer. She now lives in Sheffield, England.Life Chatterjee was born in Delhi and has lived in India, Japan, Bangladesh, Hong Kong, Egypt, and Morocco, before coming to Britain in 1972. She attended seven schools and four universities, receiving a BA from the American University in Cairo, Egypt, MA degrees from the University of Kent at Canterbury and Leeds Beckett University, and a PhD from Lancaster University, as well as a PGCE and honorary doctorate from Sheffield Hallam University.