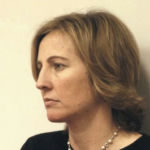 Why Is Dee Dee Myers Influential?

According to Wikipedia, Margaret Jane "Dee Dee" Myers is an American political analyst who served as the 19th White House Press Secretary during the first two years of the Clinton administration. She was the first woman and the second-youngest person to hold that position. Myers later co-hosted the news program Equal Time on CNBC, and was a consultant on The West Wing. She was the inspiration for fictional White House Press Secretary C. J. Cregg. She is also the author of the 2008 New York Times best-selling book, Why Women Should Rule the World. In 2020, she joined the Gavin Newsom administration as Senior Advisor to the Governor and Director of the Governor’s Office of Business and Economic Development.

Other Resources About Dee Dee Myers

What Schools Are Affiliated With Dee Dee Myers?

Dee Dee Myers is affiliated with the following schools: