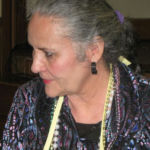 Why Is Denise Chávez Influential?

According to Wikipedia, Denise Elia Chávez is a Chicana author, playwright, and stage director. She has also taught classes at New Mexico State University. She is based in New Mexico. Early life and education Chávez was born to a Mexican American family in Las Cruces, New Mexico. The first story she wrote was when she was 8, about the willow tree outside her house. Chávez attended Catholic school for twelve years. She graduated from Madonna High School in Mesilla. While in High School, she won a full tuition scholarship to study drama at New Mexico State University . She received her Bachelor's from NMSU in 1971 and master's degrees in Theater from Trinity University in 1974. While in college, she began writing dramatic works. Later she entered the MFA program at the University of New Mexico and earned a degree in Creative Writing in 1984 under the direction of mentors Rudolfo Anaya and Tony Hillerman.

Other Resources About Denise Chávez

What Schools Are Affiliated With Denise Chávez?

Denise Chávez is affiliated with the following schools: