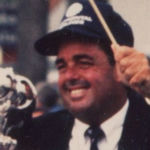 Why Is Dennis Conner Influential?

According to Wikipedia, Dennis Walter Conner is an American yachtsman. He is noted for winning a bronze medal at the 1976 Olympics, two Star World Championships, and three wins in the America's Cup. Sailing career Conner was born September 16, 1942, in San Diego. He competed in the 1976 Olympics together with Conn Findlay and took the bronze medal in the Tempest class. Conner also took part in the 1979 Admiral's Cup, as helmsman on the Peterson 45 named Williwaw.

Other Resources About Dennis Conner

What Schools Are Affiliated With Dennis Conner?

Dennis Conner is affiliated with the following schools: