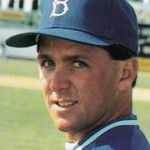 Why Is Dennis Springer Influential?

According to Wikipedia, Dennis Leroy Springer is an American former professional baseball right-handed pitcher, who played in Major League Baseball for the Philadelphia Phillies, California Angels, Tampa Bay Devil Rays, Florida Marlins, New York Mets, and Los Angeles Dodgers. He is most remembered for his use of the knuckleball.

Other Resources About Dennis Springer

What Schools Are Affiliated With Dennis Springer?

Dennis Springer is affiliated with the following schools: