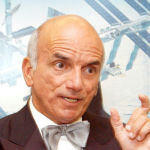 Why Is Dennis Tito Influential?

According to Wikipedia, Dennis Anthony Tito is an American engineer, entrepreneur and astronaut. In mid-2001, he became the first space tourist to fund his own trip into space, when he spent nearly eight days in orbit as a crew member of ISS EP-1, a visiting mission to the International Space Station. This mission was launched by the spacecraft Soyuz TM-32, and was landed by Soyuz TM-31.

Other Resources About Dennis Tito

What Schools Are Affiliated With Dennis Tito?

Dennis Tito is affiliated with the following schools: