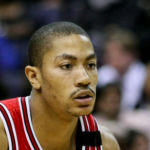 Why Is Derrick Rose Influential?

According to Wikipedia, Derrick Martell Rose is an American professional basketball player for the New York Knicks of the National Basketball Association . He played one year of college basketball for the Memphis Tigers before being drafted first overall by his hometown Chicago Bulls in the 2008 NBA draft. He was named the NBA Rookie of the Year in 2009 and became the youngest player to win the NBA Most Valuable Player Award in 2011 at age 22.

Other Resources About Derrick Rose

What Schools Are Affiliated With Derrick Rose?

Derrick Rose is affiliated with the following schools: