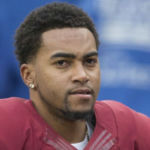 Why Is DeSean Jackson Influential?

According to Wikipedia, DeSean William Jackson is an American football wide receiver who is a free agent. He played college football for the California Golden Bears, where he was recognized as a consensus All-American in 2006 and 2007. He was drafted by the Philadelphia Eagles in the second round of the 2008 NFL Draft, and has also played for the Washington Redskins, Tampa Bay Buccaneers, and Los Angeles Rams. Jackson has been selected to the Pro Bowl three times, and was the first player selected to the Pro Bowl at two different positions in the same year when he was named to the 2010 Pro Bowl as a wide receiver and return specialist.

Other Resources About DeSean Jackson