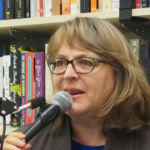 Why Is Diana Butler Bass Influential?

According to Wikipedia, Diana Butler Bass is an American historian of Christianity and an advocate for progressive Christianity. Bass is currently an independent scholar who writes on American religion and culture. She is the author of eleven books, many of which have won research or writing awards. She earned a PhD in religious studies from Duke University in 1991 with an emphasis on American ecclesiastical history. While at Duke she studied under George Marsden. From 1995 to 2000, she wrote a weekly column on religion and culture for the New York Times Syndicate that appeared in more than seventy newspapers nationwide and has since become a popular commentator on American religion for other media outlets. She has blogged for the Sojourners God's Politics blog, On Faith at The Washington Post, Beliefnet, and The Huffington Post. She is associated with Sojourners and the Red-Letter Christian movement. She currently authors the Substack newsletter The Cottage.

Other Resources About Diana Butler Bass

What Schools Are Affiliated With Diana Butler Bass?

Diana Butler Bass is affiliated with the following schools: