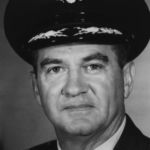 Why Is Dick Catledge Influential?

According to Wikipedia, Richard C. Catledge , born in Shawnee, Oklahoma, was a major general in the US Air Force. He formed and led the first U.S. Air Force Air Demonstration Squadron, the Thunderbirds. Education He was raised in Memphis, Tennessee. Catledge was a great participant in sports during his high school years, especially in diving. He won the state championship in diving when he was moved back to Oklahoma, where he finished high school. In these years, Catledge would also find one of the things he enjoyed a great deal in life, motorcycles, not to mention the stunts he would come to pull with them. While attending Compton Junior College in southern California, he also won the southern California junior college diving championship.

Other Resources About Dick Catledge

What Schools Are Affiliated With Dick Catledge?

Dick Catledge is affiliated with the following schools: