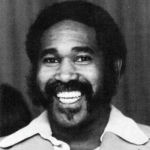 Why Is Dick Griffey Influential?

According to Wikipedia, Richard Gilbert Griffey was an American record producer and music promoter who founded SOLAR Records, a RAS acronym for "Sound of Los Angeles Records". The label played a major role in developing a funk-oriented blend of disco, R&B and soul music during the 1970s and 1980s. As a concert promoter, Griffey arranged bookings for artists such as James Brown, The Sylvers, Aretha Franklin, Jon Gibson, Stevie Wonder, and the Jacksons.

Other Resources About Dick Griffey

What Schools Are Affiliated With Dick Griffey?

Dick Griffey is affiliated with the following schools: