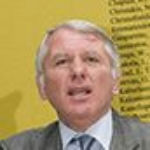 Why Is Dimitri Nanopoulos Influential?

According to Wikipedia, Dimitri V. Nanopoulos is a Greek physicist. He is one of the most regularly cited researchers in the world, cited more than 48,500 times over across a number of separate branches of science. Biography Dimitri Nanopoulos was born and raised in Athens. His father descended from an Aromanian family of Northern Epirus, while his mother was from the Greek island of Kea. He studied Physics at the University of Athens and he graduated in 1971, continuing his studies at the University of Sussex in England, where he obtained his Ph.D. in 1973 in High Energy Physics. He has been a Research Fellow at the European Organization for Nuclear Research in Geneva, Switzerland and for many years has been a staff member and Research Fellow at the École Normale Supérieure, in Paris, France and at Harvard University, Cambridge, United States. In 1989, he was elected Professor at the Department of Physics, at the NASA-supported Texas A&M University, where since 1992 he has been a Distinguished Professor of Physics, and since 2002 holder of the Mitchell/Heep Chair in High Energy Physics; he is also a distinguished HARC fellow at the Houston Advanced Research Center in Houston, Texas. In 1997 he was appointed regular member of the Academy of Athens, and, in 2005, President of the Greek National Council for Research and Technology, Greek National Representative to the European Laboratory for Particle Physics, CERN, and to the European Space Agency .

Other Resources About Dimitri Nanopoulos

What Schools Are Affiliated With Dimitri Nanopoulos?

Dimitri Nanopoulos is affiliated with the following schools: