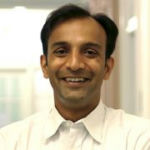 Why Is DJ Patil Influential?

According to Wikipedia, Dhanurjay "DJ" Patil is an American mathematician and computer scientist who served as the Chief Data Scientist of the United States Office of Science and Technology Policy from 2015 to 2017. He is the Head of Technology for Devoted Health. He previously served as the Vice President of Product at RelateIQ, which was acquired by Salesforce.com, as Chief Product Officer of Color Labs, and as Head of Data Products and Chief Scientist of LinkedIn. His father, Suhas Patil, is a venture capitalist and the founder of Cirrus Logic.

Other Resources About DJ Patil

What Schools Are Affiliated With DJ Patil?

DJ Patil is affiliated with the following schools: