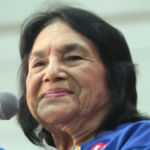 Why Is Dolores Huerta Influential?

According to Wikipedia, Dolores Clara Fernández Huerta is an American labor leader and civil rights activist who, with Cesar Chavez, is a co-founder of the National Farmworkers Association, which later merged with the Agricultural Workers Organizing Committee to become the United Farm Workers . Huerta helped organize the Delano grape strike in 1965 in California and was the lead negotiator in the workers' contract that was created after the strike.

Other Resources About Dolores Huerta

What Schools Are Affiliated With Dolores Huerta?

Dolores Huerta is affiliated with the following schools: