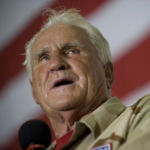 Why Is Don Shula Influential?

According to Wikipedia, Donald Francis Shula was an American football defensive back and coach who served as a head coach in the National Football League from 1963 to 1995. The head coach of the Miami Dolphins for most of his career, Shula is the NFL's winningest head coach at 347 career victories and 328 regular season victories. He held his first head coaching position with the Baltimore Colts, whom he led for seven seasons, and spent his next 26 seasons with Miami. Shula had only two losing seasons during his 33 years as a head coach and led the Dolphins to two consecutive Super Bowl titles in Super Bowl VII and Super Bowl VIII. His first Super Bowl title during 1972 is the only perfect season in NFL history.

Other Resources About Don Shula

What Schools Are Affiliated With Don Shula?

Don Shula is affiliated with the following schools: