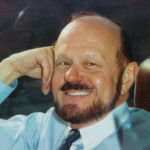 Why Is Donn B. Murphy Influential?

According to Wikipedia, Donn B. Murphy taught theatre and speech courses at Georgetown University from 1954 to 2000. At the invitation of Jacqueline Kennedy and Letitia Baldrige, he became a theatrical advisor to the John F. Kennedy and Lyndon B. Johnson Administrations for White House dramatic and music presentations in the East Room . He was a founding member of the National Theatre Corporation and was Vice-President and then President and Executive Director of the National Theatre in Washington, D.C. from 1974 to 2010.

Other Resources About Donn B. Murphy

What Schools Are Affiliated With Donn B. Murphy?

Donn B. Murphy is affiliated with the following schools: