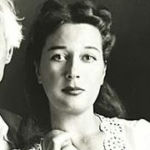 Why Is Dorothea Tanning Influential?

According to Wikipedia, Dorothea Margaret Tanning was an American painter, printmaker, sculptor, writer, and poet. Her early work was influenced by Surrealism. Biography Dorothea Tanning was born and raised in Galesburg, Illinois. She was the second of three daughters to Andrew Peter Tanning and Amanda Marie Hansen , who named her for her maternal grandmother. After graduating from Galesburg Public High School in 1926, Tanning worked in the Galesburg Public Library and attended Knox College . After two years of college she quit to pursue an artistic career, moving first to Chicago in 1930 and then to New York in 1935, where she supported herself as a commercial artist while working on her own painting. Tanning was married briefly to the writer Homer Shannon in 1941, after an eight-year relationship.

Other Resources About Dorothea Tanning

What Schools Are Affiliated With Dorothea Tanning?

Dorothea Tanning is affiliated with the following schools: