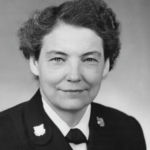 Why Is Dorothy C. Stratton Influential?

According to Wikipedia, Dorothy Constance Stratton is best known as the first director of the SPARS, the U.S. Coast Guard Women's Reserve during World War II. In 1942, she became the first woman to be commissioned an officer in U.S. Coast Guard and is credited with giving its Women's Reserve program the name of SPAR, an acronym created from the Coast Guard motto, Semper Paratus, and its English translation, Always Ready. Lieutenant Commander Stratton attained the rank of captain in February 1944 and served as director of the SPARs from 1942 until January 1946. She was also a trailblazer for women in other areas. She became Purdue University's first full-time Dean of Women and the first director of personnel at the International Monetary Fund . Stratton also served as the national executive director of the Girl Scouts of the USA .

Other Resources About Dorothy C. Stratton

What Schools Are Affiliated With Dorothy C. Stratton?

Dorothy C. Stratton is affiliated with the following schools: