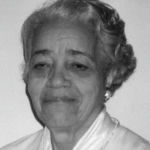 Why Is Dorothy Vaughan Influential?

According to Wikipedia, Dorothy Jean Johnson Vaughan was an American mathematician and human computer who worked for the National Advisory Committee for Aeronautics , and NASA, at Langley Research Center in Hampton, Virginia. In 1949, she became acting supervisor of the West Area Computers, the first African-American woman to receive a promotion and supervise a group of staff at the center.

Other Resources About Dorothy Vaughan

What Schools Are Affiliated With Dorothy Vaughan?

Dorothy Vaughan is affiliated with the following schools: