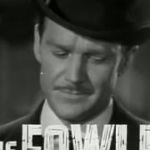 Why Is Douglas Fowley Influential?

According to Wikipedia, Douglas Fowley was an American movie and television actor in more than 240 films and dozens of television programs, He is probably best remembered for his role as the frustrated movie director Roscoe Dexter in Singin' in the Rain , and for his regular supporting role as Doc Holliday in The Life and Legend of Wyatt Earp. He is the father of rock and roll musician and record producer Kim Fowley.

Other Resources About Douglas Fowley

What Schools Are Affiliated With Douglas Fowley?

Douglas Fowley is affiliated with the following schools: