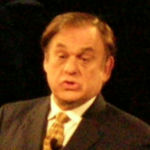 Why Is Earl Mindell Influential?

According to Wikipedia, Earl Lawrence Mindell is a Canadian-American writer and nutritionist who is a strong advocate of nutrition as preventive healthcare and homeopathy. Early life and education Mindell was born to parents William and Minerva on January 20, 1940, in Saint Boniface, Manitoba. He immigrated to the United States in 1965 and was naturalized in 1972. On May 16, 1971, Mindell married Gail Andrea Jaffe; they have two children.

Other Resources About Earl Mindell

What Schools Are Affiliated With Earl Mindell?

Earl Mindell is affiliated with the following schools: