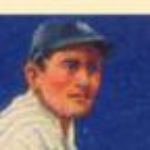 Why Is Earle Combs Influential?

According to Wikipedia, Earle Bryan Combs was an American professional baseball player who played his entire career for the New York Yankees . Combs batted leadoff and played center field on the Yankees' fabled 1927 team . He is one of six players on that team who have been inducted into the Baseball Hall of Fame; the other five are Waite Hoyt, Herb Pennock, Tony Lazzeri, Lou Gehrig and Babe Ruth.

Other Resources About Earle Combs

What Schools Are Affiliated With Earle Combs?

Earle Combs is affiliated with the following schools: