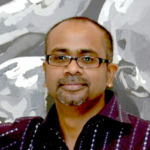 Why Is Ebenezer Sunder Singh Influential?

According to Wikipedia, Ebenezer Sunder Singh is an Indian-American visual artist based in Brooklyn, New York. Singh works primarily as a painter, sculptor, photographer and filmmaker. Early life and education Singh was born in the temple town of Tirunelveli, Tamil Nadu in India. His formative years were influenced by the twin heritages of his hometown, which houses both Christian cathedrals and the Hindu Nellaiappar Temple. Singh went on to graduate from Government College of Fine Arts, Chennai, where he had begun to show his work in state-level exhibitions. He studied under A. P. Santhanaraj and L. Mumusamy. Following his move to the United States, Singh received his MFA in Visual Art from the Lesley University College of Art and Design, where he studied photography and video art under Julia Scher and Judith Barry.

Other Resources About Ebenezer Sunder Singh

What Schools Are Affiliated With Ebenezer Sunder Singh?

Ebenezer Sunder Singh is affiliated with the following schools: