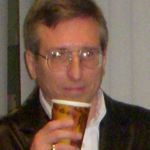 Why Is Ed Pegg Jr. Influential?

According to Wikipedia, Edward Taylor Pegg Jr. is an expert on mathematical puzzles and is a self-described recreational mathematician. He wrote an online puzzle column called Ed Pegg Jr.'s Math Games for the Mathematical Association of America during the years 2003–2007. His puzzles have also been used by Will Shortz on the puzzle segment of NPR's Weekend Edition Sunday. He was a fan of Martin Gardner and regularly participated in Gathering 4 Gardner conferences. In 2009 he teamed up with Tom M. Rodgers and Alan Schoen to edit two Gardner tribute books.

Other Resources About Ed Pegg Jr.

What Schools Are Affiliated With Ed Pegg Jr.?

Ed Pegg Jr. is affiliated with the following schools: