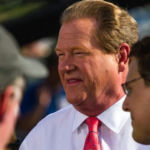 Why Is Ed Schultz Influential?

According to Wikipedia, Edward Andrew Schultz was an American television and radio host, a political commentator, news anchor and a sports broadcaster. He was the host of The Ed Show, a weekday news talk program on MSNBC from 2009 to 2015, and The Ed Schultz Show, a talk radio show, nationally syndicated by Dial Global from 2004 to 2014. The radio show ended on May 23, 2014, and was replaced by a one-hour podcast, Ed Schultz News and Commentary, which ran from 2015 until his 2018 death. Schultz also hosted a daily primetime weekday show, News with Ed Schultz, on RT America TV channel based in Washington, D.C., that is part of the RT network.

Other Resources About Ed Schultz

What Schools Are Affiliated With Ed Schultz?

Ed Schultz is affiliated with the following schools: