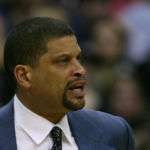 Why Is Eddie Jordan Influential?

According to Wikipedia, Edward Montgomery Jordan is an American former professional basketball player and coach. He formerly served as head coach of the Philadelphia 76ers, Washington Wizards, and Sacramento Kings in the National Basketball Association . He was also head coach for three seasons at Rutgers University, where he played basketball but left without receiving a degree.

Other Resources About Eddie Jordan

What Schools Are Affiliated With Eddie Jordan ?

Eddie Jordan is affiliated with the following schools: