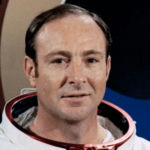 Why Is Edgar Mitchell Influential?

According to Wikipedia, Edgar Dean Mitchell was a United States Navy officer and aviator, test pilot, aeronautical engineer, ufologist and NASA astronaut. As the Lunar Module Pilot of Apollo 14, he spent nine hours working on the lunar surface in the Fra Mauro Highlands region, making him the sixth person to walk on the Moon.

Other Resources About Edgar Mitchell

What Schools Are Affiliated With Edgar Mitchell?

Edgar Mitchell is affiliated with the following schools: