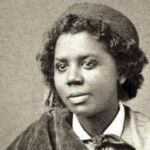 Why Is Edmonia Lewis Influential?

According to Wikipedia, Mary Edmonia Lewis, "Wildfire" , was an American sculptor, of mixed African American and Native American heritage. Born free in Upstate New York, she worked for most of her career in Rome, Italy. She was the first African-American sculptor to achieve national and then international prominence. She began to gain prominence in the United States during the Civil War; at the end of the 19th century, she remained the only Black woman artist who had participated in and been recognized to any extent by the American artistic mainstream. In 2002, the scholar Molefi Kete Asante named Edmonia Lewis on his list of 100 Greatest African Americans.

Other Resources About Edmonia Lewis

What Schools Are Affiliated With Edmonia Lewis?

Edmonia Lewis is affiliated with the following schools: