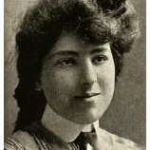 Why Is Edna Ferber Influential?

According to Wikipedia, Edna Ferber was an American novelist, short story writer and playwright. Her novels include the Pulitzer Prize-winning So Big , Show Boat , Cimarron , Giant and Ice Palace , which also received a film adaptation in 1960.

Other Resources About Edna Ferber

What Schools Are Affiliated With Edna Ferber?

Edna Ferber is affiliated with the following schools:

What Are Edna Ferber's Academic Contributions?

Edna Ferber has made the following academic contributions: