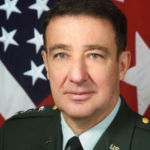 Why Is Edward D. Baca Influential?

According to Wikipedia, Edward Dionicio Baca was a lieutenant general in the United States Army who was the first Hispanic to serve as Chief of the National Guard Bureau. Early life Edward Baca was born in Santa Fe, New Mexico, on July 27, 1938, into a family with a long history in New Mexico. His mother, Delphine Garcia, was indigenous to New Mexico and one of the first major female Mexican political activists in New Mexico. His father, Ernesto, was a veteran of both World War II and the Korean War. Baca's ancestors arrived in Mexico City with the conquistadores in the 16th century and participated in the Oñate expedition that resulted in the founding of the Province of New Mexico. Two of his great-grandfathers fought in the Civil War.

Other Resources About Edward D. Baca

What Schools Are Affiliated With Edward D. Baca?

Edward D. Baca is affiliated with the following schools: